History of the Presidency 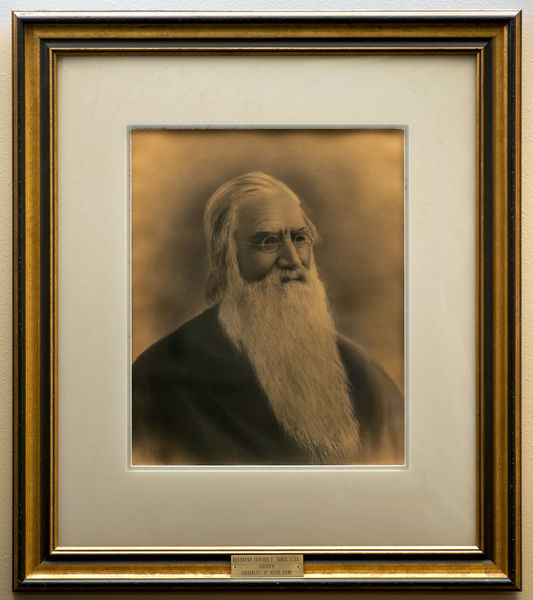 The University of Notre Dame du Lac was founded in 1842 by a priest of the Congregation of Holy Cross, Rev. Edward Sorin.  As Notre Dame’s first president, Fr. Sorin’s overarching vision of a great American Catholic university inspired future presidents, all priests of the Holy Cross Order, to advance Notre Dame’s growth throughout its history.

Father James A. Burns, CSC, Notre Dame's great theorist of education, revolutionized the University in the 1920s. In eliminating the preparatory school and dramatically upgrading the Law School, in establishing the University's first meager endowment and a board of lay advisors to oversee it, Burns made it clear that Notre Dame was committed to nothing less than preeminence in American Catholic higher education.

Beginning in the 1930s the University was strengthened by an influx of distinguished European scholars fleeing the Nazis, and, drawing on their expertise, Father (later Cardinal) John A. O'Hara, CSC, significantly expanded the graduate school to include programs in biology, physics, philosophy and mathematics.

The explosive growth of the University – both in size and in stature – gained national prominence during the 35–year tenure of Rev. Theodore M. Hesburgh, C.S.C., who himself became an internationally-known figure for his work in education, the Church, human rights, and world affairs. Two defining moments in Notre Dame's history occurred at Father Hesburgh's direction: the transference of governance in 1967 from the Congregation of Holy Cross to a predominantly lay board of trustees and the admission of women to undergraduate studies in 1972.

Under the leadership of Rev. Edward A. Malloy, C.S.C., from 1987 to 2005, the University continued to grow in stature. Endowed faculty positions grew to more than 200, and the student body became one of the 20 most selective in the nation.

Rev. John I. Jenkins, C.S.C., a professor of philosophy, became Notre Dame's 17th president on July 1, 2005. His presidency to date has focused on enhancing the University’s research activity while maintaining excellence in undergraduate education and serving the Catholic Church.