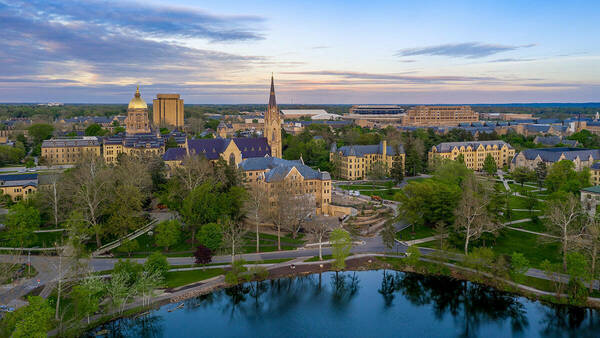 The University of Notre Dame committed to becoming a carbon neutral campus by 2050 and to a reduction in carbon dioxide of at least 65 percent from 2005 levels within the next nine years, University President Rev. John I. Jenkins, C.S.C., announced today during opening remarks at the first keynote event for this year’s Notre Dame Forum, which has as its theme “Care for Our Common Home: Just Transition to a Sustainable Future.”

“Through the conscientious work of Executive Vice President Shannon Cullinan and many others, I am pleased to announce that Notre Dame is committing to a goal of carbon neutrality by 2050 — less than 30 years from now,” Father Jenkins said. “The use of more geothermal, large-scale solar arrays, hydroelectricity, recovered energy, conservation and other emerging technologies and fuel sources will hopefully get us to a 65 percent reduction in CO2 by 2030, and to zero net neutral carbon emissions 20 years later.

“Since 2008, the need for additional space at the University, particularly in the area of research, has increased the square-footage of our buildings by one-third, requiring more heating, lighting and cooling. Despite the increase in space, however, energy consumption dropped by 11 percent. I thank the dedicated and imaginative people responsible for these remarkable achievements.”

Achieving the energy goals articulated by Father Jenkins will required a multifaceted approach, likely including:

Spurred by Pope Francis’ 2015 encyclical, Laudato Si’, Father Jenkins announced that fall that the University would stop using coal by the end of 2020. That goal was reached more than a year ahead of time when the last piece of coal was used on Oct. 14, 2019.

From a baseline year of 2005, the University already has exceeded its goal set in 2010 to achieve a 50 percent reduction in carbon emissions per gross square foot by 2030. Major projects have included:

A robust set of conservation measures on campus have included:

The decarbonization plan was led by Paul Kempf, assistant vice president for utilities and maintenance, and his team.

Originally published by Dennis Brown at news.nd.edu on September 10, 2021.