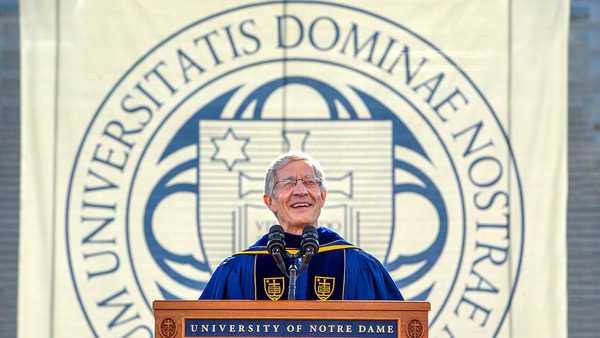 Thomas G. Burish, Charles and Jill Fischer Provost at the University of Notre Dame, will step down as provost at the conclusion of his current five-year term on July 1, 2020, the University’s chair of the Board of Trustees, John J. Brennan, and president, Rev. John I. Jenkins, C.S.C., announced Thursday (Aug. 1).

Notre Dame’s provost since 2005, Burish serves as chief academic officer, responsible for the overall operation of the academic enterprise, including the faculty, colleges, schools, institutes and libraries, as well as functions such as admissions, student advising and financial aid. The provost is the University’s second-ranking officer behind the president.

“It is difficult to overstate the positive impact Tom has had on our University as provost,” Brennan said. “For nearly 15 years, he has guided the strategy and investments that enhanced our faculty and strengthened our scholarship to the great benefit of our undergraduate and graduate students, created new research programs and partnerships, and significantly advanced Notre Dame’s academic reputation among the nation’s leading universities.Tom also was the driving force behind many of the University’s major initiatives, including the creation of the Harper Cancer Research Institute, the Keough School of Global Affairs and the IDEA Center, Notre Dame’s hub of innovation, entrepreneurship and commercialization.”

“Words cannot adequately express my gratitude and respect for Tom’s outstanding leadership, his visionary leadership of the academy, his commitment to our Catholic mission and his tireless efforts to make Notre Dame a truly great and truly distinctive university,” Father Jenkins said. “Tom has been a transformative provost for Notre Dame, and for 15 years an invaluable colleague. He and his wife Pam have become dear friends. We have all benefited tremendously from his intellect, judgment, determination and selfless devotion to Notre Dame and its mission.”

“It has been a great joy and privilege to return to my alma mater as provost and to be a part of Notre Dame’s distinctive excellence as a Catholic research university,” Burish said. “I have been honored to work with and learn from Father John and the Trustees, and with faculty, staff, and administrative colleagues who have displayed ever-rising standards of service and excellence. And it has been a labor of love to work with students whose inspiring talent and principled goals constantly renew my hope in the future. In a career filled with countless blessings, serving the Notre Dame family is a gift which has given great meaning to my life. I shall always be grateful.”

Among Father Jenkins’ key priorities for Burish as provost was to strengthen academics and elevate the University’s commitment to research and graduate studies, efforts that have resulted in significant progress. Since 2006, total research expenditures more than doubled from $79 million in 2006 to more than $212 million in 2017. Investments in the Graduate School have more than doubled, resulting in the addition of more than 15 graduate programs and a 25 percent increase in applications.

Starting in 2010, the University also made significant investments in and placed increased emphasis on strengthening international programs and global engagement with the creation of Notre Dame International. Since then, Notre Dame has enhanced existing partnerships across the globe and developed many new ones, creating Global Gateways in Beijing, Dublin, Jerusalem, London and Rome. In 2014, the Donald R. Keough School of Global Affairs was established, the first new college or school at Notre Dame in nearly 100 years.

The University also has made substantial gains attracting an increasingly diverse student body and top students from across the nation and around the world. Through focused efforts, the University increased the number of undergraduate students of color and international students attending Notre Dame from less than a quarter to more than a third since 2005.  During the same period, need-based financial aid was increased from $60 million to $154 million.

In one of the most recent academic initiatives, the University has begun welcoming to campus successful people from all walks of life who have completed traditional careers and are seeking ways to serve the greater good in their later years. Called the Inspired Leadership Initiative, the program represents the first of what is expected to be a growing set of lifelong learning offerings at Notre Dame in the years to come.

A key aspect of Notre Dame’s growing academic stature and research prominence over the past 15 years has been its ability to add a new generation of world-class teachers, researchers and scholars to its already outstanding faculty, Burish said. He credits this success to the shared commitment of everyone involved in the academic enterprise, from the benefactors who provide the funding for endowed faculty positions to the deans and department chairs who continue to recruit many of the very best faculty members anywhere.

Burish is co-author or co-editor of four books, including “Coping with Chronic Disease: Research and Applications” and “Cancer, Nutrition, and Eating Behavior: A Biobehavioral Perspective.” He also has contributed to more than 15 other books and has authored 70 journal articles. A member of the American Cancer Society’s national board of directors from 1991 to 2006, Burish served as its chair from 2004 to 2005. He presently serves on the board of directors of BioCrossroads, the Beacon Health System and the Center for Research Libraries.

He and his wife, Pamela, have two sons and four grandchildren.

Notre Dame will conduct a comprehensive national and international search for a successor to Burish. In the coming months, as provided for in the University’s Academic Articles, a search committee, chaired by Father Jenkins, will be formed. It will include faculty and a student representative from among the members of the University’s Academic Council, elected to the search committee by that council. Father Jenkins may also appoint to the committee additional faculty and a student to ensure a broad range of views and perspectives. The committee, after consulting the campus community, will consider the desired qualities and qualifications of the next provost, receive and consider nominations, and ultimately make a recommendation to Father Jenkins from a pool of highly qualified candidates that the committee hopes to consider.  Father Jenkins will pass along both the committee’s recommendation and his own to the Board of Trustees, which then elects the next provost.

Originally published by Notre Dame News at news.nd.edu on August 01, 2019.