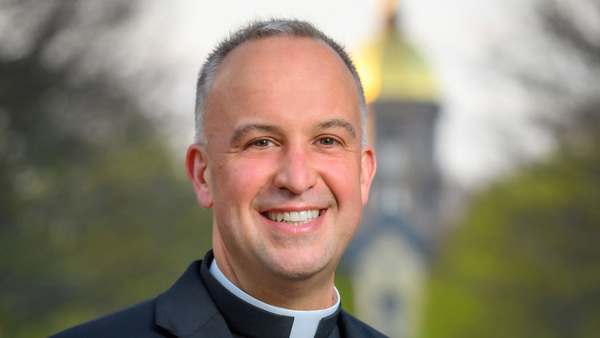 “We are fortunate to have in Father Olinger a seasoned administrator, a dedicated priest and a dynamic leader,” Father Jenkins said. “I have enjoyed working closely with Gerry over the past three years and look forward to collaborating with him — building on Erin Hoffmann Harding’s legacy — to educate the minds and hearts of our students.”

“I am honored to accept Father Jenkins’ invitation to serve as vice president for student affairs and grateful for the opportunity to carry forward many of the important initiatives established by my predecessor, Erin Hoffmann Harding,” Father Olinger said. “A Notre Dame education, in the tradition of the Congregation of Holy Cross, cultivates both the mind and the heart, and I am excited to contribute to students’ intellectual, spiritual and moral formation. I look forward to serving all of our students in the context of a vibrant, inclusive community, leading an extraordinary team of student affairs colleagues, and being a partner with many across the University who make Notre Dame a great place to live and learn.”

In his current position since August 2018, Father Olinger stewards and deepens Notre Dame’s Catholic and Holy Cross mission and is the University’s liaison to the Congregation of Holy Cross, U.S. bishops and the Holy See. He oversees the Tantur Ecumenical Institute in Jerusalem and provides critical leadership for the University’s ecumenical and interfaith outreach. In addition, Father Olinger directs the Notre Dame-Newman Centre for Faith and Reason in Dublin and Grotto Network, the University’s digital media network for evangelizing Catholic young adults. He also ministers as an in-residence priest in Alumni Hall.

Before coming to Notre Dame, Father Olinger served in several senior administrative roles at the University of Portland, a sister institution to Notre Dame also founded by the Congregation of Holy Cross. Most recently, he was Portland’s vice president for university relations, responsible for the Offices of Alumni and Parent Relations, Development, Marketing and Communications and University Events.

As vice president for student affairs at Portland, Father Olinger had oversight for the Offices of Residence Life, Public Safety, Student Activities, Career Services, Campus Ministry and International Student Services, as well as the University’s Health and Counseling Center and Moreau Center. He also co-chaired the Presidential Advisory Committee on Inclusion; co-created a joint academic and student affairs professional development program; implemented an innovative late-night and weekend student programming model, “Pilots After Dark”: and played an integral role in the planning and development of several campus projects, including the construction of the Beauchamp Recreation and Wellness Center and Lund Family Residence Hall, and the renovation of the Pilot House Student Center.

Father Olinger served previously as executive assistant to Portland’s president and concurrent assistant professor of political science in the university’s College of Arts and Sciences, teaching courses in character ethics and on the U.S. judicial system.

A current member of the board of directors for King’s College in Wilkes-Barre, Pennsylvania, and a trustee of Strada Education Network, Father Olinger served for four years on Notre Dame’s Board of Trustees. He also served on the board of directors for the Association for Student Affairs at Catholic Colleges and Universities and the board of trustees for De La Salle North Catholic High School in Portland. He is a member of the state bars of Indiana and Pennsylvania.

Originally published by Dennis Brown at news.nd.edu on May 10, 2021.