The Notre Dame Award is given to women and men whose life and deeds have shown exemplary dedication to the ideals for which the University stands: faith, inquiry, education, justice, public service, peace and care of the most vulnerable. 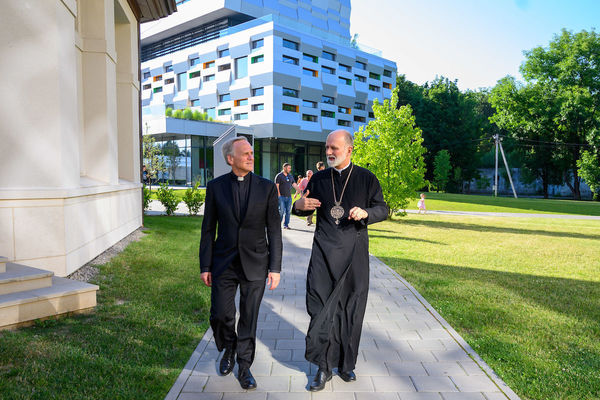 LVIV, Ukraine — Ukrainian Catholic Archbishop Borys Gudziak received the 2019 Notre Dame Award on Saturday (June 29) for his work for religious and academic freedom, and for his courageous and visionary leadership of the first Catholic university established in the territory of the former Soviet Union.

University of Notre Dame President Rev. John I. Jenkins, C.S.C., presented the award, saying Archbishop Gudziak has shown that “the aspiration of Catholic education is not simply the imparting of knowledge and skills, but the transformation of lives and ultimately the healing of a broken world.”

Archbishop Gudziak is widely known in the Catholic Church and the Eastern European region for rebuilding the faithful in an independent Ukraine after the Ukrainian Catholic Church was banned under the Soviet Union and its clergy were jailed or murdered. He also built the Ukrainian Catholic University into one of the country’s most reputable institutions, and established a campus center in the L’Arche community model for integrating the disabled into university life.

“In the face of innumerable challenges, in a society traumatized by war, genocide and political oppression, he and his colleagues have made the Ukrainian Catholic University a center for cultural thought, Christian witness and the education of a generation who can bring to Ukraine healing and hope,” Father Jenkins said in his remarks.

In accepting the award, Bishop Gudziak highlighted the importance of Catholic universities in general and the leadership in particular that the University of Notre Dame can provide in expanding Catholic scholarship around the world.

As a person who established a Catholic university where none existed, he said he would urge Pope Francis in a meeting next week “to launch a challenge to the global community of Catholic universities to come together with the leadership of the church and to go where there are no Catholic universities, and offer the wonderful education that our tradition has been disseminating so generously.”

“We can speak with the wisdom of the church and with the knowledge of the school,” Archbishop Gudziak said. “We can witness and stand and swim against the current.”

The Notre Dame Award is presented to “men and women whose life and deeds have shown exemplary dedication to the ideals for which the University stands: faith, inquiry, education, justice, public service, peace and care for the most vulnerable.”

Previous recipients of the Notre Dame Award have included President and Mrs. Jimmy Carter of the United States; St. Mother Teresa of Calcutta; John Hume of Northern Ireland; Cardinal Vinko Puljić, archbishop of Sarajevo; L’Arche community founder Jean Vanier of Trosly-Breuil, France; and most recently, the Colectivo Solecito de Veracruz, a group of Mexican mothers organized to search for their missing loved ones in the face of criminal violence and state complacency.

“Hundreds of priests and nuns in Lviv alone were deported, imprisoned or murdered by the secret police. Seminaries were shuttered,” Father Jenkins said. “Through your diligent, scholarly work, the world now has a permanent record of these outrages, and of how courageous Ukrainians kept their faith alive, even in the gulag.”

This is the first time the award is being conferred on someone of Ukrainian descent.

As part of the award ceremony, Notre Dame and the Ukrainian Catholic University signed a memorandum of understanding for the two institutions to “develop collaborations and exchanges in fields of shared interest and expertise.”

Archbishop Gudziak, an American-born son of Ukrainian immigrants, worked in his parents’ homeland starting in 1992, and founded the Institute of Church History in Lviv to chronicle the Soviet period when the church was banned. He was ordained to the priesthood six years later and was named vice rector and then rector of Lviv Theological Academy, the institution that later grew into the Ukrainian Catholic University.

Founded in 2002, Ukrainian Catholic University is built on the “pillars of the martyrs and the marginalized” — the martyrs being those who suffered and died under communist repression, and the intellectually disabled who too often exist on the margins of society. Archbishop Gudziak considered honoring both as essential to rebuilding trust in Ukrainian society.

Influenced early in his life by Rev. Henri Nouwen and his devotion to people with special needs, Archbishop Gudziak created the Emmaus Center on the Ukrainian Catholic University campus, a place where people with developmental disabilities and their families receive spiritual support and share their lives with students.

​In a Ukrainian Weekly story, Archbishop Gudziak said he considers the developmentally disabled “professors of human relations … We need the gifts they have. They don’t care if you’re a rector, a doctor or how rich you are. What they force us to confront is the most important pedagogical question of all: Can you love me?”

Despite working in an independent Ukraine, he still felt political pressure from the pro-Russian government for his advocacy for open thought and discussion. In 2010, Archbishop Gudziak described a visit from a Ukrainian security agent warning him about student protests against the then-pro-Russian government, and asking him to sign a letter of a pattern under the KGB that would have required him to inform on students. The archbishop refused to even read the letter.

He also was threatened with deportation at one point and said he had evidence that his phone was tapped.

“The revival of such practices is a conscious attempt to revive the methods of the Soviet totalitarian past and to re-instill fear in a society that was only beginning to feel its freedom,” he wrote at the time. “Speaking and writing openly about these issues is the most peaceful and effective manner of counteracting efforts to secretly control and intimidate students and citizens.”

The archbishop invoked the spirit of the martyrs in 2014 during the “Revolution of Dignity” protests in the Ukrainian capital Kyiv that led to the fall of the pro-Soviet government of Viktor Yanukovych. After a 29-year-old professor, Bohdan Solchanyk, was killed during a peaceful pro-democracy protest, Archbishop Gudziak and other religious leaders of all faiths joined with the protesters.

Raised in Syracuse, New York, Archbishop Gudziak stayed close to home to earn his bachelor’s degree in philosophy and biology from Syracuse University. He then studied in Rome at Holy Sofia College and the Pontifical Urban University, earning a theology degree, after which he received his doctorate in Slavic and Byzantine cultural history from Harvard University.

Archbishop Gudziak was elevated recently by Pope Francis as archbishop of the Ukrainian Catholic Archeparchy of Philadelphia (the equivalent of an archdiocese), which includes the District of Columbia, Virginia, Maryland, Delaware, New Jersey and parts of eastern Pennsylvania. He also holds the title of metropolitan, making him the top spiritual leader for all Ukrainian Catholics in the United States.

Before his current appointment in Philadelphia, he was head of the archeparchy serving Ukrainian Catholics in France, Belgium, the Netherlands, Luxembourg and Switzerland. He is the author of more than 50 papers on the history of the Church, theological training and other topics, and last year received an honorary doctor of humane letters degree from Syracuse.

He remains president and chair of the board of UCU and a member of the permanent synod of the Church, which meets four times annually, usually in Kyiv.