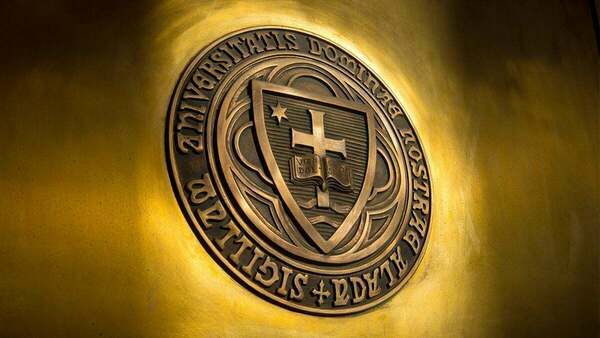 “In June of 2019, I had the honor of traveling to Ukraine to present Archbishop Borys Gudziak with the Notre Dame Award for his unceasing commitment to religious and academic freedom, and for his courageous and visionary leadership of the first Catholic university established in the territory of the former Soviet Union.

“In remarks at the award presentation, I spoke of the ‘innumerable challenges in a society traumatized by war, genocide and political oppression’ and of the efforts of Archbishop Gudziak and his colleagues to ‘bring to Ukraine healing and hope.’”

“The former oppressors of Ukraine are now known by another name and are waging war under a different flag, but the trauma is no less today than in the past in this nation that has suffered far too much. Now, more than ever, our friends in Ukraine are in need of healing and hope.

“We at Notre Dame stand in solidarity with all peace-loving people worldwide in demanding an end to this invasion of a sovereign nation. This unprovoked war is an international abomination and must stop now. Until it does, may God keep safe all of the innocent men, women and children who are currently in harm’s way. The prayers of the Notre Dame family are with them.”

Originally published by Notre Dame News at news.nd.edu on February 24, 2022.