From March 26 to 28, the University of Notre Dame hosted senior leadership delegations from five Christian denominations for a historic gathering that gave rise to “The Notre Dame Consultation Statement,” a document affirming recent significant strides of progress in ecumenical relations and recommending ways to further develop relationships between the various traditions.

Delegations were led by: 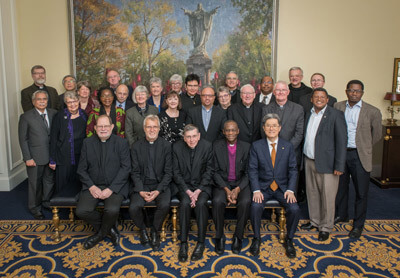 The leadership of the five Christian denominations had not met together before the Notre Dame Consultation and represented the Christian world communions formally associated with the Joint Declaration on the Doctrine of Justification. This 1999 document — affirmed by Anglicans, Lutherans, Methodists, Reformed Christians and Roman Catholics — expressed a shared understanding on the nature of salvation as being by God’s grace through faith in Jesus Christ, and addressed fundamental issues that have divided Christians for centuries.

The purpose of the gathering was to discuss implications of that landmark agreement in the context of growing closeness and collaboration between the various denominations, with a goal of providing recommendations for how the Christian communities that have adopted the Joint Declaration can demonstrate deeper communion with each other. The communities recognize that disunity impedes Christians’ ability to share the message of God’s liberating grace as well as the communities’ capacities to proclaim that, in a time of individualism and commodification, God’s salvation, human beings and creation are not for sale.

“We were honored to host a historic meeting of senior delegations from the Anglican, Lutheran, Methodist, Reformed and Roman Catholic communions that explored possibilities for deeper communion,” said Notre Dame President Rev. John I. Jenkins, C.S.C. “In an often fractious, angry and violent world, we sensed the working of the Holy Spirit in bringing together courageous people of faith from different communions to proclaim a common belief in the Gospel message of God’s liberating grace and hope for this world, and to commit themselves to work together toward reconciliation and unity despite differences. The University of Notre Dame is grateful for the blessing of hosting this important consultation, and we pray that it bears much fruit.”

This three-day gathering engaged the campus and broader community with a public prayer service and panel discussion in tandem with the private ecumenical consultation.

The University of Notre Dame has had a long-standing commitment to ecumenism, including its stewardship of the Tantur Ecumenical Institute, located in Jerusalem. Founded by Pope Paul VI and Rev. Theodore Hesburgh, C.S.C., the mission of the Tantur Ecumenical Institute is to catalyze among Christians a culture of encounter, understanding, civil discourse and bridge building.

A full communiqué from the consultation is available here for download.

Originally published by Notre Dame News at news.nd.edu on April 03, 2019.