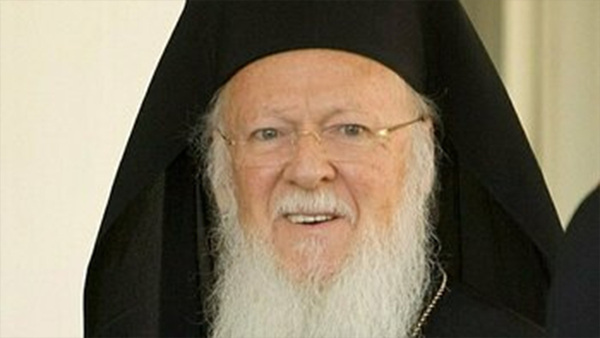 His All-Holiness Bartholomew I, Orthodox Archbishop of Constantinople-New Rome and Ecumenical Patriarch, who was not able to offer the commencement address to the University of Notre Dame Class of 2020 due to the COVID-19 pandemic, will travel to the campus Oct. 28 to receive an honorary degree from the University at an academic convocation and deliver an address on environmental stewardship.

“Ecumenical Patriarch Bartholomew is one of the world’s most eminent and courageous religious leaders, and we are deeply honored that he will visit Notre Dame and receive an honorary degree,” Notre Dame President Rev. John I. Jenkins, C.S.C., said. “The spiritual leader of Eastern Orthodox Christians worldwide, he has been an inspiration for all humankind, especially on the themes of environmental care, support for migrants and religious liberty. The University of Notre Dame warmly welcomes His All-Holiness as a brother in Christ.”

The convocation will be held in the Basilica of the Sacred Heart at 5:15 p.m., and in addition to the Ecumenical Patriarch’s address, will feature the Archdiocesan Byzantine Choir performing “Creation: From Adam to Salvation,” composed and led by Georgios Theodoridis, Archon Music Instructor of the Greek Orthodox Archdiocese of America, in honor of His All-Holiness.

The Ecumenical Patriarch is the spiritual leader of 300 million Orthodox Christians worldwide, with a church history that dates to the Day of Pentecost and the early Christian communities. The apostle Andrew founded the church in A.D. 36 in the city then known as Byzantium, later Constantinople and today Istanbul.

Ecumenical Patriarch Bartholomew was elected the 270th archbishop of Constantinople and ecumenical patriarch in October 1991. His tenure has been highlighted by ecumenical and inter-religious dialogue — including formal visits with Roman Catholic, Orthodox, other Christian, Jewish and Muslim leaders — as well as efforts to promote religious freedom, human rights and protection of the environment.

Known as the “Green Patriarch,” he has said: “For human beings to destroy God’s creation, degrade the integrity of the earth and contaminate the planet’s waters, land and air — all of these are sins.”

The recipient of 35 honorary degrees, Ecumenical Patriarch Bartholomew was honored in 1997 with the Congressional Gold Medal, the highest civilian award bestowed by the U.S. Congress.

Ecumenical Patriarch Bartholomew’s visit to the United States this fall, his first in 12 years, marks the 30th anniversary of his election as Ecumenical Patriarch. The Apostolic Visit will inaugurate the Centennial Celebration of the founding of the Greek Orthodox Archdiocese of America which will be observed next year across the country. In addition to his visit to Notre Dame, Ecumenical Patriarch Bartholomew will meet with President Joe Biden and other senior government leaders in Washington, D.C., and raise a cross on the rebuilt St. Nicholas Greek Orthodox Church in New York, destroyed in the terrorist attacks of Sept. 11, 2001. He also will preside at a service at St. Andrews Greek Orthodox Church in South Bend.

Ordained to the diaconate in 1961 and to the priesthood in 1969, Ecumenical Patriarch Bartholomew served as an assistant dean at the Theological School of Halki for four years, then was appointed personal secretary to the late Ecumenical Patriarch Demetrios. He also served as metropolitan (the leader of a diocese or archdiocese) of Philadelphia and the metropolitan of Chalcedon.

The convocation is free and open to members of the University community but ticketed, and seating in the Basilica is limited. The convocation will be live-streamed. More information is available at go.nd.edu/ecumenical-patriarch

Originally published by Dennis Brown at news.nd.edu on October 07, 2021.